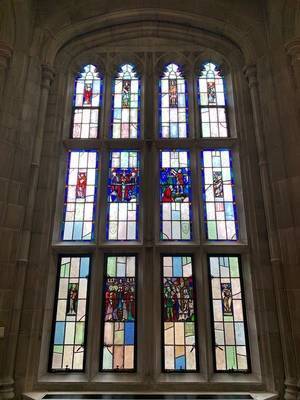 In the theology window, flanking the central panels are six major theologians. On the left, theologians of early Christianity: Saints Augustine, Jerome, and John Chrysostom. On the right, theologians of medieval Europe: Saints Gregory, Thomas Aquinas, and Peter Canisius.

In many of the Bapst windows, Sanborn inserted simple & sometimes whimsical monochromatic drawings. He did this, he said, to keep the windows from being predictable and “to stimulate interest.” In this window those drawings aren’t random or whimsical: 4 symbols originally sat below each of the four main panels.

In the upper left panel, dogmatic theology depicts the holy trinity in the style of many medieval illustrations: Father as a bearded man in ornate red and purple robes, son as Jesus on the cross, and the holy spirit as a white dove. Note how the deep purple robes seem to envelope & protect the figure of Christ. The symbol below is a chalice and cross, representing faith.

Both that panel and pastoral theology in the upper right have backgrounds of night sky, two of the few adjacent panels linked in this way. The shepherd with his arms raised to the sky seems almost to be reaching for the trinity, which seems to float above that same night sky’s clouds. The symbol below is an anchor, representing hope, as in Hebrews 6:19: “This we have as an anchor of the soul, sure and firm.”

In the scripture panel below, Matthew, Mark, Luke and John flank Moses holding the commandments, presenting the full range of scripture from old testament to new. The symbol below, listed as “charity” in older guides, is missing.

To the left, the moral theology panel depicts Pope Clement VII denying Henry VIII of England annulment of his marriage to Catherine of Aragon. Henry’s response is wonderfully portrayed: He holds a scroll, his petition for annulment, in his left hand, and his shoulders sag and his face registers disappointment. The symbol below this panel is a scroll with the phrase “Imitatio Christi,” the title of Thomas à Kempis’s devotional book emphasizing the interior life, published in the 15th Century, possibly the most read book after the Bible, and very popular during Henry VIII’s reign. Its presence here could be a commentary on Henry VIII’s famously extravagant lifestyle.