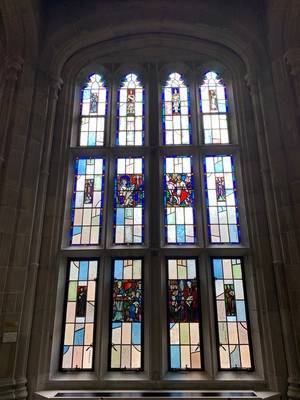 When the windows depicting philosophy were designed in the late 1920’s, memories of the Great War (World War I) were fresh. Note the flames in the background of the psychology panel (lower right). That’s Louvain University in Belgium, set on fire by the invading Germans. Cardinal Mercier, a strong figure in the Flemish resistance, had created the Higher Institute of Philosophy there, a place where Thomist scholars helped establish phenomenology--the philosophical study of experience and consciousness--as a predominant school of philosophical thought.

To Mercier’s left is Aristotle. His school of philosophy was known as “peripatetic,” because he walked through the colonnades of the Lyceum while teaching. He wasn’t a citizen of Athens, so could not own property, and used the public space of the Lyceum as a gathering place for scholars and students, as other non-citizen teachers--like Socrates and Plato--had done before him.

Above Aristotle is an interesting portrayal of St. Thomas Aquinas. In many paintings, he’s shown holding a book, sometimes writing in it. But Sanborn, a careful student of medieval art, made a more historically realistic scene with the saint writing at the kind of desk commonly used by monks in that era. The window behind him is dark, suggesting night, with a crucifix providing light - perhaps more spiritual than actual.

A young man (not a famous philosopher) symbolically represents an ethical life in the upper right panel. He carries a shield advising “do good, shun evil.” A devil hovers over a reclining figure, and an angel hovers over his outstretched hand encouraging a laborer harvesting wheat. Perhaps this panel and the  St. Thomas panel were intended to encourage tired students working late at night in Gargan Hall.