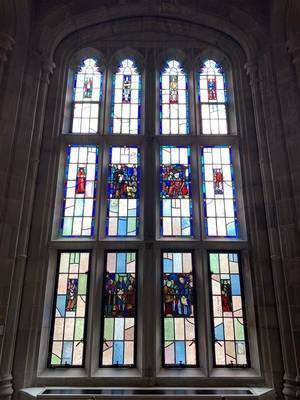 In Independence Hall, Philadelphia, seen in the lower left panel, are the five drafters of the Declaration of Independence: Benjamin Franklin, diplomat, statesman, and scientist; Thomas Jefferson, third president of the United States; John Adams, second president of the United States; Roger Sherman, lawyer and statesman; and Robert Livingston, lawyer, politician, and diplomat.

Just above this panel, Lincoln holds the Emancipation Proclamation, freeing slaves. He is flanked by a soldier on his left and a sailor on his right. In the background stands the capitol dome. Additional monochrome drawings above and below this panel show a Sister of Charity aiding a wounded soldier, and a nurse aiding a dying soldier below a Red Cross.

Immediately to the right, a woman at her spinning wheel typifies industry, while in the background are mechanical devices of steam, gas, and electricity, all related to political economy.

Below, illustrating foreign service, Commodore Matthew Perry visits Japan in 1854, negotiating a treaty to open its ports to American trade.