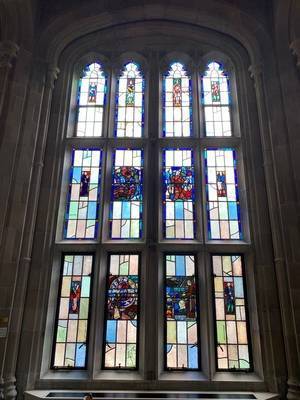 The astronomy panel at the lower left and the chemistry panel above and to the right, generally deal with the theme of science in its early stages, when astrology was still considered part of mainstream science. Here, an astrologist tracks the solar system, a telescope placed nearby. Above, a circle of zodiac signs helps chart the study, highlighted by a band of stars. In the chemistry panel, an astrologer mixes concoctions, seen as a forerunner to the modern chemist, while in the background a witch riding a broom is noted as a symbol of superstition dispelled by the science of chemistry.

To the left of chemistry, the geology panel shows the formation of the world according to the nebular theory of Pierre-Simon Laplace, French astronomer of the late 18th and early 19th centuries. He is depicted in a monochrome image to the right. Layers of earth, rock, and sediment make up the ground, while planets whirl in the cosmos above.

In the physics panel, lower right, Roger Bacon, medieval philosopher and scientist, experiments with the theory of refraction, inspired by the earlier scientific methods of Muslim scientist Ibn al-Haytham (Al-Hazen) who is credited in the lower section of the panel.