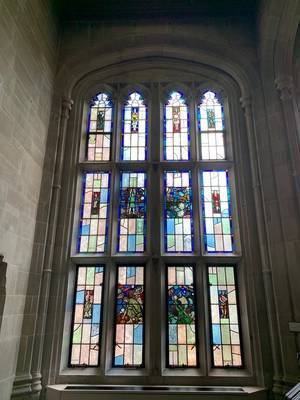 The Useful Arts was a term used at the time Bapst Library was built, for subjects related to the Industrial Arts.

In the lower left, just to the right of Euclid, Archimedes, the ancient Greek mathematician and physicist, works out formulas by drawing diagrams in the sand, moments before he is killed by Roman soldiers during the Siege of Syracuse. Nearby, ships are aflame, destroyed by magnifying mirrors Archimedes used to concentrate sunlight.

In panel above Archimedes, a youth stands on symbols of industry and transportation, capturing electricity from lightning. In the background and below are examples of modern and ancient engineering: the Egyptian pyramids, an airplane, a skyscraper, and a train.

Just to the right is a panel about seismology. An earthquake demolishes ancient and modern buildings. Lightning, a volcano, and a tidal wave are also depicted. Just below is a monochrome  depiction of Francis Anthony Tondorf, S.J., an American Jesuit seismologist.

Below seismology is meteorology. Neptune, god of the sea in Roman mythology rides a dolphin. Wind roars in the background, and ships are seen conquering the elements. The drawing below is of José María Algué, S.J., a meteorologist working in the Manila Observatory at the turn of the century.

Note the small machine depicted in the far upper left panel. It’s a “magic lantern,” an image projector, studied by Athanasius Kircher, S.J., pictured also in that panel. Among the best-known thinkers of 17th-century Europe, he was a polymath who also studied or taught Syriac, Hebrew, ethics, mathematics, geology, and medicine.