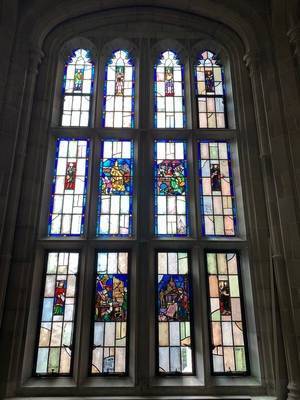 This window is dedicated to Music and Arts. Many creative geniuses of past centuries are depicted here.

The bottom left central panel shows St. Ambrose,  4th century Archbishop of Milan, composing hymns.  St. Ambrose was a biblical thinker whose literary works have been acclaimed as masterpieces of Latin eloquence, and his musical accomplishments are remembered in his hymns. Traditionally, Ambrose is credited with promoting "antiphonal chant", a style of chanting in which one side of the choir responds alternately to the other. He is also credited with composing a Latin hymn “Veni redemptory gentium” (Come, Redeemer of the nations). The Church and Monastery of St. Ambrose, Milan is shown in a small monochrome image below.

The next panel up displays 5th century B.C.  Greek sculptor, Phidias. His two most famous works were the colossal statue of Zeus, erected in the Temple of Zeus in Olympia and one of the Seven Wonders of the Ancient World, and a sculpture of the Greek virgin goddess Athena, which was housed in the Parthenon in  Athens. Here, Phidias is depicted carving the statue of Athena.

Painting and architecture on panels to the right are represented by two giants of the Italian Renaissance, Leonardo da Vinci and Michelangelo Buonarotti.