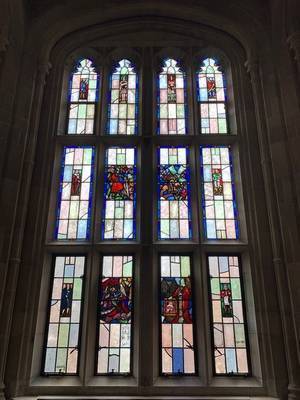 This window shows some of the leading figures and works in German, Italian, French and Spanish literature. The larger panels each feature one of the languages.

At the bottom left, German literature is represented by the dream of Brunhild, a powerful female figure from the Germanic legend, The Nibelungenlied, which was the first heroic epic put into writing in Germany, helping to found a larger genre of written heroic poetry.

The panel above that one shows a scene from Torquato Tasso’s Gerusalemme Liberata (The Liberation of Jerusalem) completed in 1581. This famous Italian romantic poem about the First Crusade was widely translated and adapted, and in more recent times was used as the basis for several operas and films.

The panel to the right is devoted to one of the most famous pieces of Spanish Literature, Cervantes’s Don Quixote (1605). The novel has been referred to as the first modern novel, and some consider it the best literary work ever written. The panel shows Don Quixote tilting at a windmill in a matchless satire on outmoded chivalry, while hapless sidekick Sancho Panza stands by.

The panel below depicts Cardinal Richelieu’s gift of paintings marking the official beginning of the Academie Francaise (the French Academy) in 1635. The Academie’s original purpose was to maintain standards of literary taste and to establish a literary language. The Academie has been in existence since its founding, except for a brief interruption during the French Revolution. In the background of this panel are the Palais-Royal and Notre Dame.