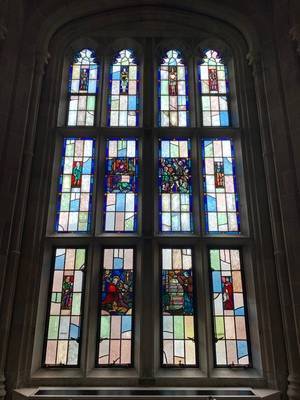 The prose window includes a wide range of prose authors. On the bottom row of the larger panels on the left is St. Jerome, (c.342–420), most well known for his Latin translation of the Bible. He followed the Hebrew text for the Old Testament rather than the Septuagint Greek favoured by his contemporaries. His work became the vulgate or common translation, the official Bible of the Roman Catholic Church.

Above the St. Jerome panel is St. Thomas More, 16th century philosopher, statesman, and Renaissance humanist. Lord Chancellor under Henry VIII, Thomas More was beheaded for his refusal to acknowledge the English king as head of the Church of England. More’s novel Utopia about the political system of an imaginary, ideal island nation, remains a seminal work on the political structure of the modern state.

To the right is a tableau from the final chapter of Dickens’s A Tale of Two Cities (1859) depicting Sidney Carton riding to the guillotine through a Parisian mob, prepared to sacrifice his life for the benefit of the woman he loves. He will soon utter one of Dickens’s most famous lines: “It is a far better thing that I do, than I have ever done; it is a far, far better rest that I go to than I have ever known.”

Below that is the symbolic figure of Time, gazing on names of noted prose writers. Inscribed at the bottom is Horace’s phrase: “Monumentum aere perennius” (a monument more lasting than bronze), often quoted in reference to works of art and literature.