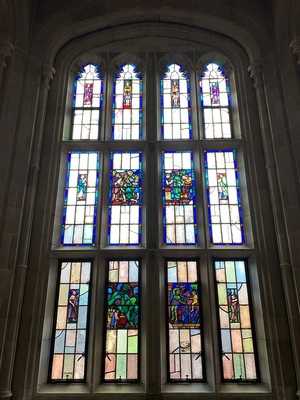 This window depicts famous Greek and Latin poets and dramatists.

In the bottom left panel, Homer’s epics are represented by the famous scene from the Odyssey in the cave of Polyphemus the Cyclops. Odysseus is heating a stake, with which he will blind Polyphemus, allowing him and his men to escape.

Above that, Virgil is shown among reapers, who were a source for his second major poem, The Georgics, in which he presents a picture of the relationship between human life and the natural world.

The other two large panels in this window are dedicated to genres. The panel to the right of Vergil is dedicated to Athenian tragedy. Greek drama originated in the festivals of Dionysus, the god of fruitfulness and vegetation, especially known as a god of wine and ecstasy. The maenads, intoxicated devotees of the god, are shown in ecstatic dance.  The depiction closely follows images painted on classical Greek vases.

The panel below shows an Athenian Comedy scene from The Frogs, Aristophanes’ play in which Euripedes and Aeschylus contend for the throne of tragedy. Produced the year after the death of Euripides, the play lampoons that writer for causing what Aristophanes saw as the decline of Greek tragedy. Among the speaking parts is, in fact, a “Chorus of Frogs,” who greet the god Dionysus with their croaking— “Brekekekex, ko-ax, ko-ax.”