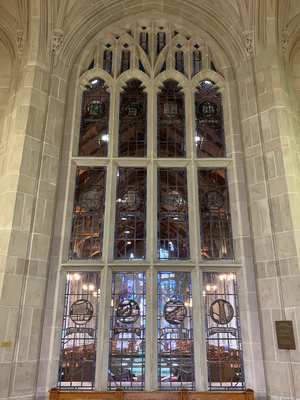 2 Genesis of the Book

The clear windows at the top of the main staircase depict the Genesis of the Book.  Many types of writing are commemorated, including Hieroglyphs, Cuneiform, Hindi, Japanese characters, Mesoamerican ideograms, and the Anglo-Saxon inscriptions of the Ruthwell Cross.

Also depicted are several written formats, including Hebrew and Greek scrolls, and influential works such as the Book of Kells, the Vulgate Bible, and the Behistun Inscription.