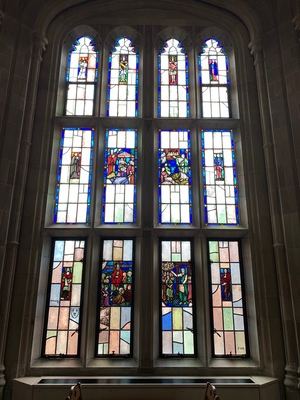 Rhetoric, the art of persuasion, was always of great importance to Jesuits. This window displays famous orators and important historical moments when the art of eloquence was practiced at its best.

To the right of Christ is Demosthenes, a 4th century B.C. Greek statesman and orator of ancient Athens, delivering his famous “Speech on the Crown”, which was termed "the greatest speech of the greatest orator in the world". In the upper left corner of this panel is a vignette of Chaeronea, the Greek city where Demosthenes delivered his funeral oration after the battle with Macedonians. At the upper end of this column, there is a youth with a shield showing waves breaking on pebbles, an allusion to Demosthenes who, according to Plutarch, spoke with pebbles in his mouth to get rid of his stammer.

Just above Demosthenes is another famous ancient orator, 1st century B.C. Roman statesman Cicero, giving his speech against Senator Cataline, accusing him of leading a plot to overthrow the Roman Republic.