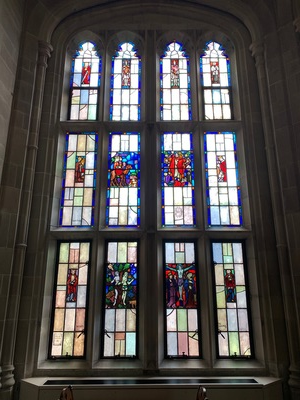 The theme of this window is Religion. Some of the most important biblical characters and events in the Bible are illuminated here. The outer panels display Moses and David followed by St. Paul and other saints from the New Testament.

The lower left panel shows the hand of God above the Garden of Eden, with Adam and Eve standing beside the Tree of Knowledge. Around them are animals, birds, vegetation, and illustrations of dry land and the sea, all referred to in the Genesis narrative. The hands of both God and Eve are shown with thumb, index, and middle finger extended—a common symbol of the Trinity in Christian art.

Above Adam and Eve are the Magi, the three wise men from the East. According to the nativity story of the Gospel of Matthew, they follow a star to Bethlehem to pay homage to the “newborn king of the Jews.” The star leads them to Jesus' birthplace, where they worship him and give him gifts.

To the right is Christ standing on the universe, the flames of Hell beneath Him, angels above Him, the blessed at His right, and the damned at His left, a traditional representation of the last judgement that accords with Matthew 25: 32-33: “All the nations will be gathered before him, and he will separate people one from another as a shepherd separates the sheep from the goats, and he will put the sheep at his right hand and the goats at his left.”