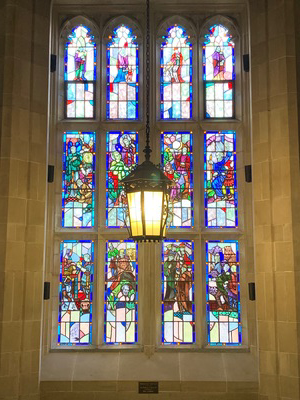 The main staircase landing has windows celebrating the work and characters of William Shakespeare. The top row panels depict the four genres in which Shakespeare wrote: history, comedy, romance comedy, and tragedy.  Below each of these panels are scenes from that genre. The history genre includes panels for Julius Caesar and Antony & Cleopatra.  The comedy genre has scenes from A Midsummer Night’s Dream and The Merry Wives of Windsor.  Romance comedy includes The Taming of the Shrew and The Merchant of Venice, and the tragedy genre depicts King Lear and Hamlet.

The windows on the East side of the staircase depict male characters from Shakespeare, including Brutus, Coriolanus, Macbeth, Romeo, Prospero and Othello.  The West side windows depict female characters such as Lady Macbeth, Ophelia, Rosalind, Viola, Juliet and Desdemona.