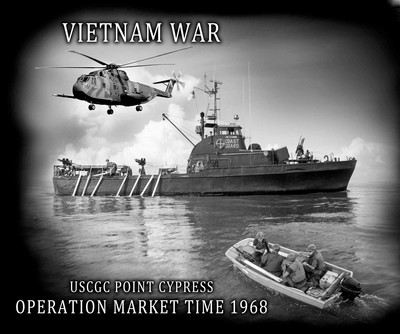 The 11th image is Vietnam War, USCGC Point Cypress, Operation Market Time, 1968.   At the request of the United States Navy, in October 1965, she was alerted for service in South Vietnam, and assigned to Coast Guard Squadron One, in support of Operation Market Time, along with eight other Point-class cutters. While the crew completed overseas training, and weapons qualifications,  at Coast Guard Island and Camp Parks California, Point Cypress was loaded on board merchant ship SS Pioneer Myth, and transported to Subic Bay Philippines, arriving in January 1966, where she was refitted for combat service.