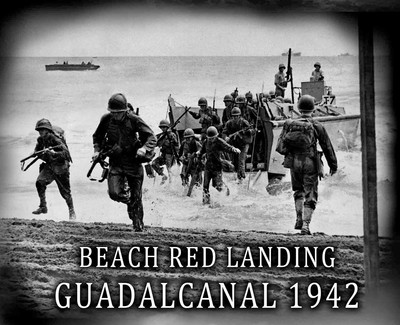 The 10th image is Beach Red Landin, Guadalcanal  1942.   The Guadalcanal American Memorial is a World War 2 monument, on Guadalcanal in Solomon Islands. It was established as a tribute to the Americans and their allies who lost their lives during the Guadalcanal Campaign, from the 7th of August 1942, to the 9to of  February 1943. The capital city of Honiara is to its north. To mark the 50th anniversary of the Red Beach landings, the U.S. War Memorial was dedicated on the 7th of August 1992. An account of this is also inscribed on red marble tablets inside the monument compound.