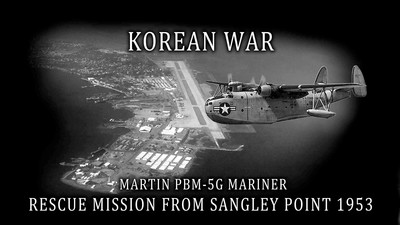 The 5th image is of the Korean War—Martin PBM-5G Mariner, Rescue Mission from Sangley Point, 1953.   One of the most dangerous search and rescue cases, undertaken by the Coast Guard, took place off the coast of mainland China, in early 1953. Communist Chinese forces shot down a Navy P2V Neptune, in the Formosa Strait, while the aircraft was on a covert patrol, along the Chinese coast. The crew ditched their burning plane and escaped into a life raft, to await rescue. The Coast Guard search and rescue station at Sangley Point responded to the call for assistance, by immediately scrambling one of its two Martin PBM-5 G Mariner seaplanes.