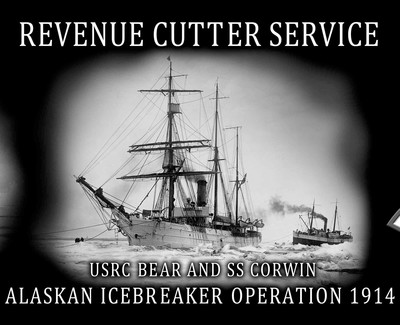 The 2nd image is of Revenue Cutter Service—USRC Bear and SS Corwin, Alaskan Icebreaker Operation, 1914.   The Corwin continued in the passenger and freight business and from 1906 to 1910, held a contract to transport mail to towns on Norton Sound and the Seward Peninsula. She was the first ship to reach Nome in the spring in 1902 through 1909, 1913, and 1914. She generally returned to Puget Sound in the fall and was often the last ship out of Nome.  In part, her early arrivals were due to the fact that she was sheathed and retained a protected and reinforced bow for ice work. In 1908, after arriving at Nome during a particularly bad ice season, the Corwin headed out again and cut channels to free three steamers that were stuck in the ice 50 miles from Nome, one (the Victoria) in danger of sinking and all in danger of being carried north by moving ice.  On June 11, 1909, Corwin received a distress call from St. Croix a vessel trapped in the ice and taking on water South of Nome. In 1914, it was arranged that she would lead the waiting fleet of steamers into Nome, following closely as the Revenue Cutter Bear picked out a channel through the ice.