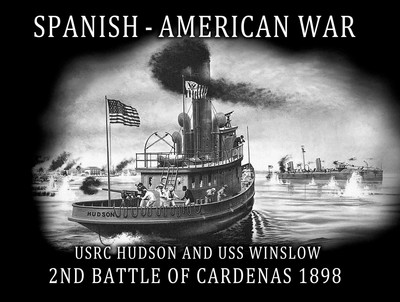 The 1st image is of the Spanish American War, USRC Hudson and Winslow, the Second Battle of Cardenas, 1898.  The Second Battle of Cárdenas was a secondary naval engagement of the Spanish American War, fought on the 11th of May, 1898, in the port of Cárdenas Cuba, between an American squadron of 5 ships, under Captain Chapman C.Todd, and 3 small Spanish vessels, under Mariano Mateu. The battle resulted in an unusually costly American reverse that dissuaded the U.S. Navy from undertaking further attacks on the port.