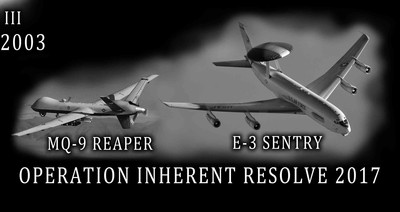 The E-3 Sentry Airborne Early Warning and Control System aircraft is the U S Air Force’s primary aerial command and control aircraft.  It features a 30-foot wide rotating radar dome than scans a wide area for aerial threats and traffic.  The dome is 30 feet in diameter, six feet thick, and is held 11 feet above the fuselage by two struts. It contains a radar subsystem that permits surveillance from the Earth's surface up into the stratosphere, over land or water. The radar has a range of more than 250 miles. The radar combined with an identification friend or foe, or I F F subsystem, can look down to detect, identify, and track enemy and friendly low-flying aircraft, by eliminating ground clutter returns that confuse other radar systems.