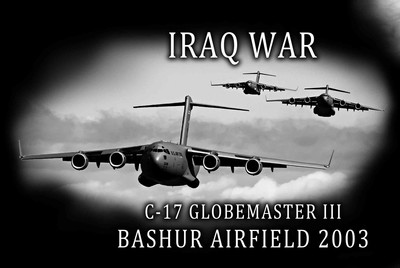 The 13th Image is of the Iraq War—C-17 Globemaster 3 Bashur Airfield 2003. On March 26th, 2003, C-130 and C-17 aircraft dropped nearly 1,000 paratroopers of the 173rd Airborne Brigade onto Bashur airfield, near Erbil in Northern Iraq. That marked the first time that the C-17 had been used in a combat airdrop. The mission took place because Turkey refused to allow the Air Force to use its air bases to deliver troops and supplies into northern Iraq, necessitating the capture of the airfield. On April 6th, 2003, US Air Force Central Command leadership declared air supremacy over all of Iraq, and on April 16th, 2003, the first humanitarian relief flight landed at Bashur airfield.