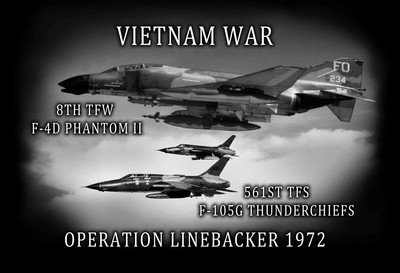 The 11th image is of the Vietnam War—8th Tactical Fighter Wing,  F-4D Phantom.   Established in Japan after World War 2 in 1948, the wing flew combat missions throughout the Korean War.   Redesignated the 8th Tactical Fighter Wing in 1958, it remained in Japan until 1964. After a year in California, it moved to Southeast Asia, where its F-4 Phantom crews earned the nicknames "MiG killers" and "bridge busters". In 1974, the wing relocated to Kunsan Air Base, South Korea, where it was redesignated the 8th Fighter Wing in 1992.