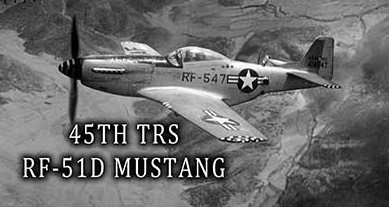 When war hit the Korean Peninsula, the U N was in dire need for recon aircraft. At Itazuka Air Base in Japan, the 45th T R S was activated on September 3rd 1950.   The 45th was the sole user of the F51-D Mustang, and would be tasked to cover the frontline with photographic and visual recon. The squadron initially flew out of Tague, easily covering their frontline targets with F-51D’s.