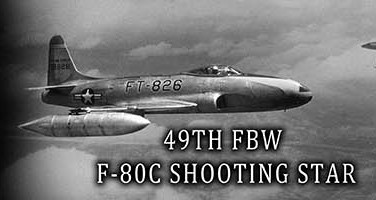 The 5th image is of the Korean War—49th F B W F-80C Shooting Star.  Phasing out its F-51s for Lockheed F-80C Shooting Stars jets, the 49th F B W moved to Taegu Air Base on 1 October 1950, becoming the first jet fighter outfit to operate from bases in South Korea. It received a Distinguished Unit Citation, for its combat operations during the first five months of the war.