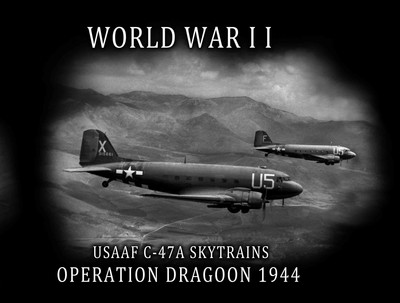 The 2nd image is World War 2, United States Air Force, C-47-A Skytrains Operation Dragoon 1944. The C-47 was vital to the success of many Allied campaigns. In particular those at Guadalcanal and in the jungles of New Guinea and Burma, where the C-47 and its naval version the R 4 D, made it possible for Allied troops to counter the mobility of the light-travelling Japanese Army. C-47s were used to airlift supplies to the encircled American forces during the Battle of Bastogne in Belgium. Possibly its most influential role in military aviation was flying "The Hump" from India into China. The expertise gained flying "The Hump" was later used in the Berlin Airlift, in which the C-47 played a major role, until the aircraft were replaced by Douglas C-54 Skymasters