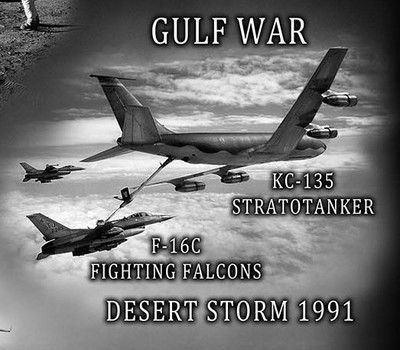 The Boeing KC-135 Stratotanker is a military aerial refueling aircraft.  The KC-135 was the US Air Force's first jet-powered refueling tanker and replaced the KC-97 Stratofreighter. The KC-135 was initially tasked with refueling strategic bombers, but was used extensively in the Vietnam War and later conflicts such as Operation Desert Storm to extend the range and endurance of US tactical fighters and bombers.

During nine years of the Vietnam conflict, K C-135s made 813,000 aerial refuelings of combat aircraft. During the Persian Gulf War, the tankers made 18,700 hookups, and transferred 278 million pounds of fuel.