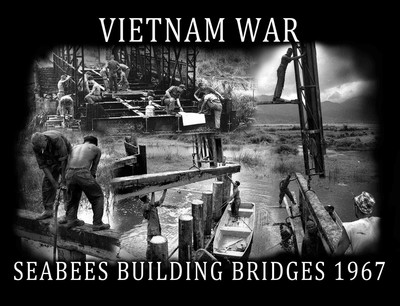 The 9th image is Vietnam War, Seabees Building Bridges, 1967.  Admiral Moreell’s concept model of C B's, was that of a  trained battalion of construction tradesmen, a military equivalent of those civilian companies, that would be capable of any type of construction, anywhere needed, under any conditions or circumstance.  It was quickly realized that this model could be utilized in every theater of operations, as it was seen to be flexible and adaptable. In addition, Seabee Battalions could be deployed individually or in multiples as the project scope and scale dictated. What distinguishes Seabees from Combat Engineers are the skill sets. Combat Engineering is but a sub-set in the Seabee toolbox.