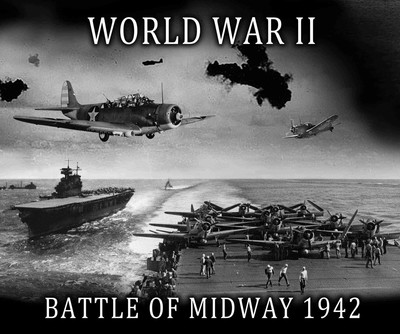 The 8th image is World War 2.  Battle of Midway, 1942.  The Battle of Midway was a decisive naval battle in the Pacific Theatre of World War 2, that took place between the 4th and the 7th of June 1942, only six months after Japan’s attack on Pearl Harbor, and one month after the Battle of the Coral Sea.  The United States Navy, under Admirals Chester Nimitz, Frank Jack Fletcher, and Raymond A Spruance, defeated an attacking fleet of the Imperial Japanese Navy, under Admirals Isoroku Yamamoto, Chuichi Nagumo, and Nobutake Kondo, near Midway Atoll, inflicting devastating damage, on the Japanese fleet that proved irreparable.   Military historian John Keegan called it “the most stunning and decisive blow in the history of naval warfare”.