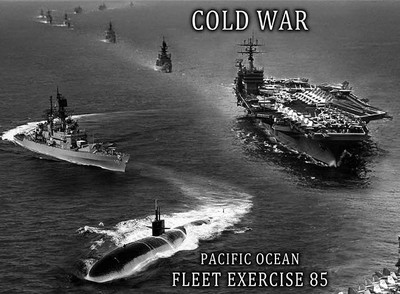 The 6th image is of the Cold War Pacific Ocean, Fleet Exercise 85.  The Cold War (1975-1985) refers to a late phase of the Cold War, marked by a sharp increase in hostility, between the Soviet Union and the West.   It arose from a strong denunciation of the Soviet Invasion of Afghanistan, in December 1979.   With the election of Prime Minister Margaret Thatcher in 1979, and American President Ronald Reagan in 1980, a corresponding change in Western foreign policy approach, toward the Soviet Union, was marked by the rejection of détente, in favor of the Reagan Doctrine policy of rollback, with the stated goal of dissolving Soviet influence, in Soviet Bloc countries. During this time the threat of nuclear war had reached new heights, not seen since the Cuban Missile Crisis of 1962.