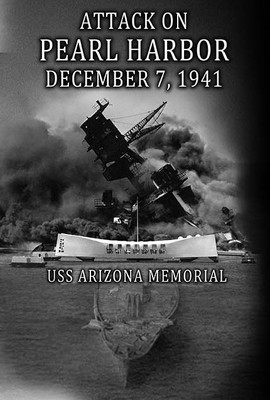 US Navy - Attack on Pearl Harbor

The 4th image is the Attack on Pearl Harbor which was a surprise military strike by the Imperial Japanese Navy Air Service upon the United States against the naval base at Pearl Harbor in Honolulu, Hawaii on Sunday morning, December 7, 1941. The attack led to the United States' formal entry into World War II the next day. The base was attacked by 353 Imperial Japanese aircraft in two waves, launched from six aircraft carriers. All eight U.S. Navy battleships were damaged, with four sunk. All but USS Arizona were later raised.

The U S S Arizona Memorial, built in 1962, has been visited by more than two million people annually.   Accessible only by boat, it straddles the sunken hull of the battleship without touching it. The battleship’s sunken remains were declared a National Historic Landmark on May 5th, 1989.