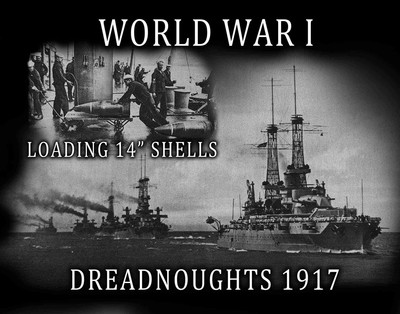 The 2nd image is of World War 1.  Loading 14 inch Shells on Dreadnoughts in 1917.  HMS Dreadnought also marked a beginning of rapid development in big gun firepower. In 1909 the Royal Navy laid down HMS Orion, the first “super dreadnought,” which displaced 22,500 tons and was armed with 13 and one half inch guns. The U.S. Navy followed with ships armed with 14-inch guns.