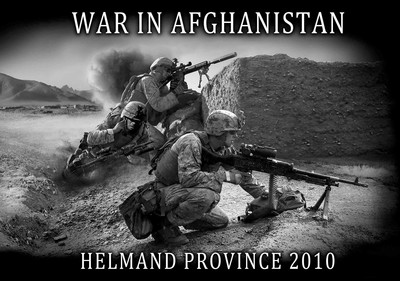 The War in Afghanistan, Helmand Province, 2010: In late September 2010, the Marines of the 3rd Battalion, 5th Regiment known as "Darkhorse" took over the fight in the Sangin District, relieving the British Marines who had been fighting the Taliban for 4 years and were pulling out of the area because of a Stalemate.  During a 7 month deployment the "Darkhorse" Battalion was able to clear and secure the Sangin area, but only after suffering the highest casualty rate of any Marine Unit during the Afghan war, losing 25 soldiers in the period of October 2010 to January 2011.  The 3/5 Battalion not only dealt with intense firefights, but the patrols were also subjected to multiple IED explosions.  In addition to the 25 casualties, the "Darkhorse" Battalion had 184 wounded, 34 of those losing limbs due to IEDs.