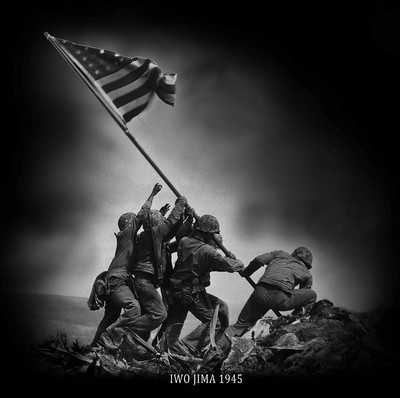 Iwo Jima 1945:  The Battle of Iwo Jima, fought February 19th to March 26th, 1945 was a major battle in which the United States Marine Corps landed on, and eventually captured the island of Iwo Jima from the Imperial Japanese Army  during World War 2. The American invasion, designated Operation Detachment, had the goal of capturing the entire island, including the three Japanese-controlled airfields, to provide a staging area for attacks on the Japanese main islands.  This five-week battle comprised some of the fiercest and bloodiest fighting of the Pacific War in World War 2.

This iconic image is titled “Raising of the Flag on Mt. Suribachi.”

The next image on the audio tour is of the Korean War.