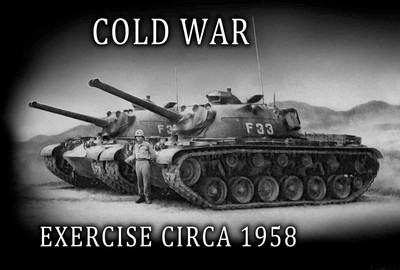 Cold War Exercise—Circa 1958:  The M67 "Zippo" Flamethrower tank, pictured here, was developed at the initiative of the US Marine Corps and, like all flamethrower tanks, it was intended to be used primarily against infantry. The "Zippo" featured no main cannon; the M48's 90mm gun was replaced with the tank's flamethrower. While firing in quick bursts, the M67's firing was described as appearing as "rods of flames". The swirling motion of the flames produced could reach round corners.You can see the tanks throwing flames at a target in the background of this image.

A later version of this tank was used by the Marine Corps extensively in The Vietnam conflict.  They proved a potent psychological weapon against fortified troops. In many instances, troops surrendered or fled upon seeing a flame tank throwing fire, rather than risk being burned alive.

The next image in the audio tour is the Vietnam War.