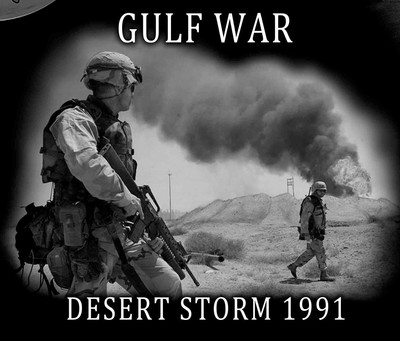 Gulf War, Desert Storm 1991: Desert Storm (January 17 – February 28 1991 was the combat phase of the Gulf War which was waged by coalition forces from 35 nations led by the United States against Iraq in response to Iraq's invasion and annexation of Kuwait arising from oil pricing and production disputes. The initial conflict to expel Iraqi troops from Kuwait began with an aerial and naval bombardment on 17 January 1991, continuing for five weeks. This was followed by a ground assault on 24 February. This was a decisive victory for the coalition forces, who liberated Kuwait and advanced into Iraqi territory. The coalition ceased its advance and declared a ceasefire 100 hours after the ground campaign started. Aerial and ground combat was confined to Iraq, Kuwait, and areas on Saudi Arabia's border.

The war marked the introduction of live news broadcasts from the front lines of the battle. The Gulf War has also earned the nickname Video Game War after the daily broadcast of images from cameras on board US bombers during Operation Desert Storm.

The next image on the audio tour is the Iraq War.