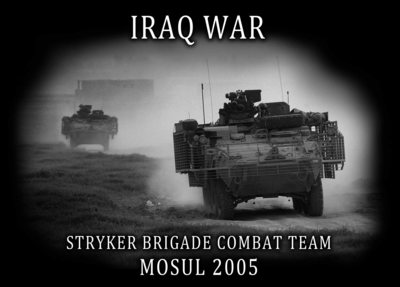 The ninth image is of the Stryker Brigade Combat Team in Mosul 2005. The Battle for Mosul was a battle fought during the Iraq War in 2004, for the capital of the Ninawa Governorate in northern Iraq, that occurred concurrently to fighting in Fallujah.

By November 8 2004, insurgents were conducting coordinated attacks and ambushes in an attempt to take over the city. That same day, units from the 1st Battalion, 24th Infantry Regiment, known as "Deuce Four", fought against the insurgents in the vicinity of the Yarmuk traffic circle, in the heart of western Mosul. The battle lasted throughout the day, as the insurgents proved to be both determined and coordinated.