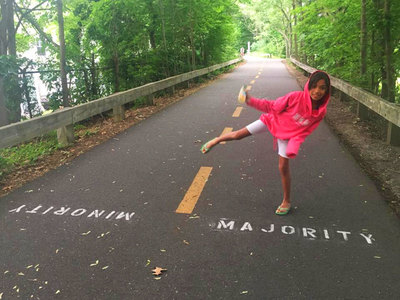 In the wake of the 2016 election, artist Nilou Moochhala chose an innovative way to highight the use of fearful and divisive rhetoric in the national political environment: she juxtaposed pairs of words with opposite meanings along the Minuteman Bikeway. Most of the words have worn away, but a few remain – faint but legible. They invite us to think about the way that language can act as a force to separate people and polarize understanding of complicated and nuanced situations.  Such rhetoric can make it harder to find the shared ground, the areas of concensus, common experience, compromise, and empathy.

The original pairs of words were: