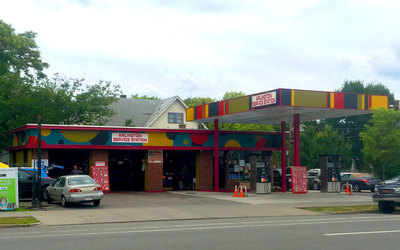 To find Dots & Dashes, by local artist Johnny Lapham, walk from Linwood Street east towards the Alwife MBTA Station. His colorful discs, made of painted plywood mounted on wooden stakes, run alongside the Bikeway between Linwood and Lake Streets.

I first met Johnny in the spring of 2018 when he was working high up on a lift, transforming the Arlington Service Station on Mass Avenue with colorful dots and stripes.  I had been driving by the Station watching this exciting process unfold and decided it was time to meet the artist. I also met the station owner, Abe, a generous supporter of the arts who was really excited to be turning the canopy over the gas pumps into a local landmark, almost a colorful and gigantic piece of sculpture.

At the time, I was also curating art installations in 5 bus shelters as part of Arlington's BRT pilot project to improve bus service on Mass Avenue during commuting hours.  I thought it would make a great impact if Johnny could add his distinctive patterns to the bus shelter close to the service station and link the two designs, maybe by painting polka dots down the sidewalk leading from the station to the bus shelter.  He developed an even more ambitious proposal, creating more than 80 colorful plywood discs that would make it seem as if the polka dots had jumped off the service station and travelled to the bus shelter; his idea was that he wanted it to look as if the dots were going to a party, a party in the bus shelter! To my eye, he succeeded.

At the end of two months, all the bus shelter artwork had to come down, and I thought of asking Johnny to recycle his discs into a different configuration responding to the terrain of the Minuteman Bikeway in 2019.  Many of the installations are about how important it is to steward the environment, and Arlington is committed to sustainability and a zero waste future, so it it very fitting to give this artwork, and the material resources and labor invested in it, a new life.