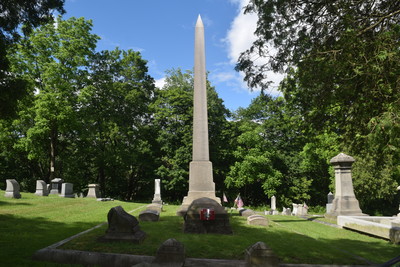 Kate and I were both from old Huntingdon area families and had known each other all our lives before we married in 1871.

He came back home from studying at Eastman Business College in Poughkeepsie, New York, and I came home from my schooling at Lawrenceville Seminary in New Jersey.

I first started working as a bank teller, but soon opened up my own book store, where I printed stationary.

He had such wonderful ideas, too. Always innovating and dreaming up what he was going to do next.

Don't let her fool you, she had as many good ideas as I did. Nothing I came up with worked without her. See, one day I was thinking about how difficult it was to keep a stack of papers together for writing - especially after watching my friend David Emmert cut, stack and staple paper to write and draw on.

He came home talking a mile a minute, so we put our heads together and starting cooking up adhesives in our kitchen to see what would stick.

I called my invention the tablet and began selling them from my shop. Before too long, I was struggling to keep up with orders and had to hire on more employees and build a factory. We even got the nicest letter from a newspaper reporter from Missouri. What was his name, Kate?

Samuel Clemens. He wrote books under a different name, though. Mark Twain. Oh, and he didn't mention that factory was the tallest building between Pittsburgh and Philadelphia?

We worked together as a team for many years until I became ill.

That was a terrible time. He was sick for months and months. His doctors said he needed to go to a hospital. We took the train to Philadelphia, but he died anyway. I felt certain if there had only been a hospital closer he might have lived.

I guarantee Kate isn't going to tell you the rest, so I will.
I didn’t do that much.

She formed an advisory board and spearheaded the formation of a hospital in my memory. It opened in 1911 and began saving lives immediately. She also oversaw the foundation of Blair Park and innumerable other charitable projects throughout the area. All of it done in secret.

If it's a secret, why are you telling it?

She did it all so well, and so quietly, not a single soul knows the scope of it to this day.
None of that is important now, what's important is that we're together now and forever.