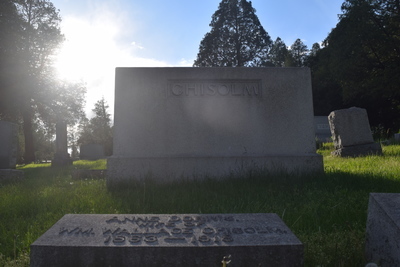 I was born into a life of privilege and I devoted many years of my life to seeing that women everywhere gained the privilege of voting.

I trained in Dresden, Germany, as a stained glass artist and at home in Huntingdon, I completed works of art for area churches and homes, until, in 1893, I was commissioned to create a large stained glass window for the Women's Pavilion. The Women's Pavilion was an exhibition of all of the best works created by female artisans aroun the world. It was a tremendous honor.

I married a Huntingdon attorney, William Chisolm, when I was in my 40s and we settled into a comfortable life together.

He supported me in my work to secure the vote for women and stood behind me when I traveled to Washington, D.C., in 1917 to protest with the "Silent Sentinels" on the White House lawn. Similar protests had been going on for over a year, but the political climate had soured with our nation's involvement in World War I and President Woodrow Wilson began arresting the protestors and incarcerating the women at the Occoquan Workhouse.

Sure enough, I and my sisters in suffrage were rounded up and jailed for 60 days. William came to bail me out, but I refused to leave when others couldn't. The treatment in the workhouse was wretched and 33 prisoners were severely beaten by 40 guards during the time I was there.

I came home, but was unwell and died of pneumonia and died in very early 1918. I am so very glad to say, the right to vote for women did come to pass just two years later in 1920.