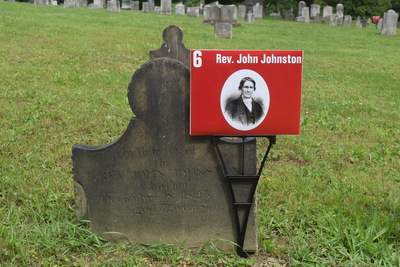 I was born in Belfast, Ireland.

I was well-educated and was called a "substantial" preacher. I became minister of "Old Hart's Log Church" in 1787. I was minister there for 36 years.

In 1790, I agreed to divide my time equally between the Hart's Log Church and the Huntingdon Presbyterian Church. While serving as minister, I married 349 couples.
In 1814, I spoke out against the War of 1812. My remarks were interpreted as being favorable to the British. This caused dissention and the Hart's Log church split in 1819 when the Alexandria Presbyterian Church was founded.
I lived in Huntingdon on the south east corner of Second and Penn Streets.