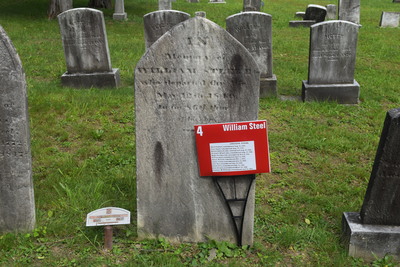 I emigrated to Huntingdon from County Donnegal with my brother in 1777.

I had a long and prosperous military career. I served in the 6th Company 2nd Batallion. In 1811, I was commissioned as a Brigadier General, Volunteers of the 2nd Brigade, Eleventh Division, Pennsylvania Militia. On July 4, 1814, I was promoted to Major General.

After serving, I began a career in politics. I served as a County Commissioner in 1796 and was elected to the State Legislature in 1802. Govenor McKean appointed me as Associate Judge in 1804. I was elected Chief Burgess of Huntingdon in 1808. Governor Snyder appointed me Prothono­tary, Register and Recorder in 1809. I served in the office until 1821.