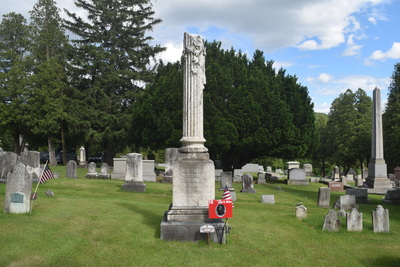 My name is Lt. Col. John Blanchard Miles. I was born on September 20, 1827 and died on May 10, 1864. I was a member of the Pennsylvania Volunteers who fought during the Civil War. I participated in many battles: Williamsburg, Malvern Hill, Antietam, Appahannock Station, Fredericksburg, Gettysburg and the Wilderness CampaignI was killed on the evening of May 10, 1864 at the Battle of Spottslyvania in Virginia while I was leading my regiment in a charge towards enemy fire. I lie in an unknown grave on the battlefield.A close friend and fellow soldier, W.G. Mitchell, said “"Blanch," the name by which I was known, "was with his regiment in the Wilderness, and I have been told by many officers and men, that in the desperate assault in which he fell, he was more than ever conspicuous for heroic courage, and was killed while leading the men up the slope and into the enemy's works. I know that he bore the reputation of being among the bravest and most dutiful officers. I have frequently heard General Hancock speak of Blanch's courage and good conduct . . . . among all the officers whom I have ever known, he was distinguished for bravery, devotion to duty and generosity of heart. I made many long marches by his side, and have seen him on many occasions of danger and trial, but never knew him to fail in the performance of his duty as a gallant and noble gentleman. Had he not been struck down at Spottsylvania, he could not have failed in rising to high rank in the army