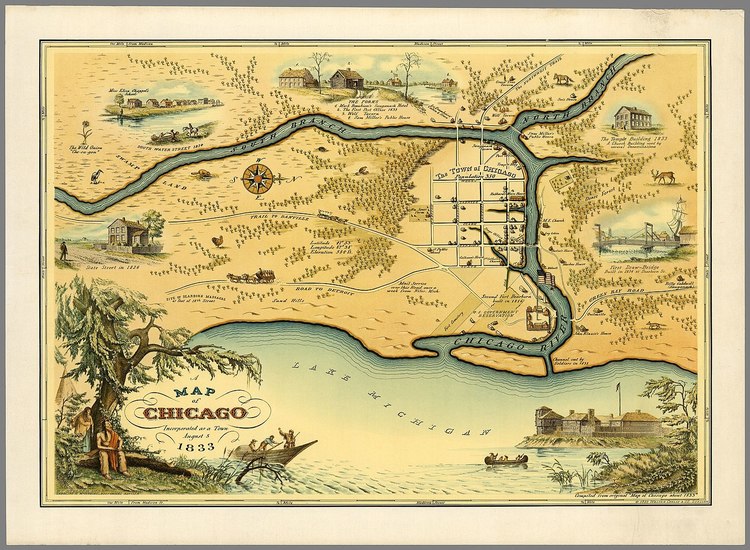 Welcome to Where Chicago Began.

A tour based on the bestselling book, Living Landmarks of Chicago. Purchase enables unlimited access, so you can listen to it as often as you'd like. Great idea when you've got visitors, or if you just want to hear fun stories.

For centuries, this area has been a transportation hub. The Odawa, Miami, Ojibwe, Illinois, Potawatomi, and other indigenous peoples could get from one place to another through the network of rivers and streams they called chicagoua. There’s a continental divide running through the area, and a short strip of land separates rivers flowing east, to Lake Michigan, and west, to the Mississippi River.

The French explored this stinky, swampy land in the 1600s; Marquette and Jolliet, followed later by La Salle, forded and portaged and mapped.

Gradually, a few European men traded with and occasionally married into the local tribes.

However, none of the early explorers stayed for any length of time. A few seasonal trading posts popped up over the years, but relations between the original inhabitants and the newcomers had sometimes violent outcomes.

By the late 1780s, however, the Revolution had spawned a new country and this land became one of its territories. In 1795, the Treaty of Greenville gave the Americans "one piece of land six miles square at the mouth of Chikago river emptying into the south-west end of Lake Michigan.”

This tour begins in Pioneer Court, which honors the city’s first non-native permanent settler, and introduces this enigmatic figure. After discovering more about the city’s earliest years, you’ll dive into the story of one of the city’s most influential bridges. Then you’ll hear the stories of three historic buildings that tower over the Chicago River.

Let’s meet Chicago, shall we?


TIP: Check your spam email folder for an access link if you paid for this tour.