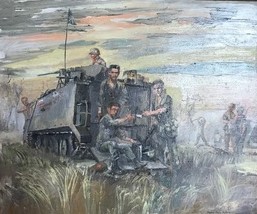 A member of a mechanized battalion, “Doc” Tom Bernardi, K I A on January 1, 1968, gives water to a “Straight Leg” Private Ralston.   Lt. Gordon  Kelly is looking on.  John Parsons is on the 50 caliber machine gun.

PatMerth is at the front, pulling maintenance with Jim Frost. Dave Gehr is the R T O.

Dave Gehr was a member of C-3-22nd Infantry, 4th Infantry Division. He hails from Sheboygan, WIisconsin.  He was drafted into the army in 1965 and completed his Infantry training at Fort Lewis, Washington. He served in Vietnam during 1966 and 1967. After the war he returned to Sheboygan, Wisconsin, took advantage of the GI Bill, and earned his college degree. Today he is an educator in The Sheboygan Area School District with more than 27 years on the job.

Dave has some special insights about Vietnam and how it impacted his life. He says that in looking back, he is intensely aware how important life is. “I realize that freedom is not free,” he wrote. “Although I was drafted, I view my time in service with pride. I, and all that I served with, gave it our best shot. We served during very difficult times. We developed a camaraderie and trust from one another that those outside the military will never realize. The most sincere friendships I have ever made and still cherish are those men that I shared a foxhole with.  Greater friends cannot be found."

Dave and Beckie Gehr make their home in Sheboygan, where he is active in school and veterans affairs.