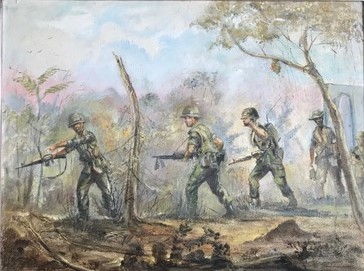 The trail disappears into bamboo. An air vent in the lower left is a sign of an underground tunnel. Birds are in flight as the pointman, Dave DeMauro instructs the RTO, Jim Gibson, to radio the commander with the patrol’s findings while Red Ants are hanging in a tree at top right.

David DeMauro was working his way through college when he was drafted into the army during his senior year at UCLA. He graduated from Basic and Advanced Infantry Training at Fort Ord, California. He was assigned to Charlie Company, 35th Battalion, 22nd Infantry, 25th Division on august 15, 1968. He served as the 1st Platoon RTO and fought in several engagements including the attach at Fire Support base Buell, Firefights in the Ben Cui Rubber Plantation, and skirmishes in the jungles north of Tay Ninh. David was assigned as the battalion Correspondent in January 1969, and later attained the rank of Sergeant. Many of David’s war photographs and chronicles of field battles were published in military and civilian periodicals. Most notable was his coverage of the North Vietnamese assault on Fire Support Base Crook in June 1969, in which 399 NVA soldiers were killed during two days of fighting.  David has been awarded the Purple Heart, Army Commendation Medal, Bronze Star with two oak leaf clusters, the Air Medal, and two Vietnamese Service Ribbons.