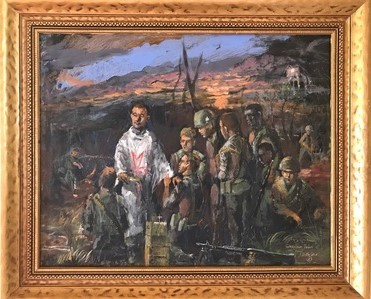 This scene depicts Chaplain Jim Tobin saying Mass and giving Communion to soldiers in the field, some of whom later died in battle. Tom Bernardi, Bill Janes, and David Ditch were among them.

The Chaplain was often among the troops, even under fire. The men looked forward to the visits, regardless of the religious affiliation of the Chaplain. He brought important communications to the men, offered comfort and hope during difficult times, and administered holy rites to those killed in action.