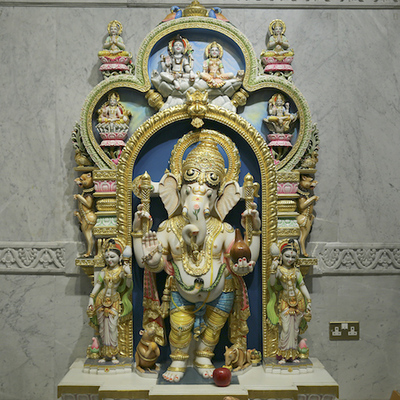 Ganesh is the son of Shiva and Parvati and a vital aspect of their divinity.

He is a well-known and adored deity of Hinduism, worshipped as the remover of obstacles and the bestower of fortunes.

He is especially honoured during auspicious occasions such as marriages.

His large ears portray him as an excellent listener whereas his small eyes depict perfect discernment. His round belly reveals his ability to stomach the confessed weaknesses of devotees.

Also in this shrine you will notice the Shivaling. This conical black stone represents infinity and eternity, and is an impersonal aspect of Shiva.

Facing the Shivaling is Nandi the Bull, who symbolises limitless effort and quiet tolerance, both of which are required for self-realisation. Nandi forever faces Shiva, praying for strength and guidance from him.

Also facing the Shivaling is Kachha the Tortoise, who symbolises perseverance and patience. He urges us to retract our five senses – denoted by his five limbs – from materialism and to focus on spirituality.

When ready, please move along to the Sita-Rama shrine, on your right. Then press next.