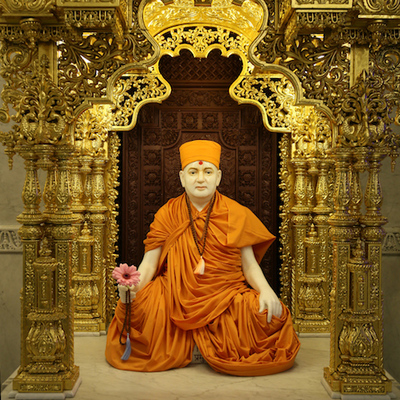 His Holiness Pramukh Swami Maharaj was the fifth spiritual successor of Bhagwan Swaminarayan.

He was the creator of this Mandir, fulfilling the vision of his guru Yogiji Maharaj.

His striking humility, wisdom and spirituality touched many world religious and national leaders, and inspired millions to lead a God-centred, moral life guided by Hindu principles.

His selfless services to society, saintly virtues and profound devotion to God earned him the love, respect and admiration of millions around the world as one of the great Hindu teachers of our time.

Upon his passing in 2016, Pramukh Swami Maharaj was succeeded by His Holiness Mahant Swami Maharaj. He is the sixth spiritual successor of Bhagwan Swaminarayan and the present Guru of the BAPS Swaminarayan fellowship.

When you are ready, please make your way along the wall to the Shiva-Parvati shrine, and then press next.