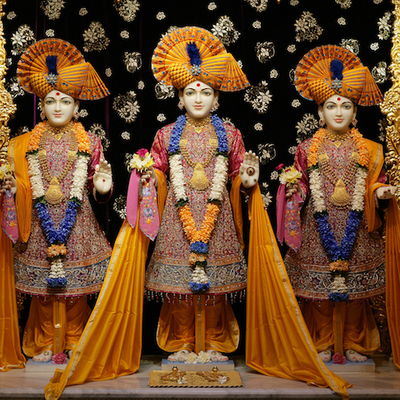 In the central shrine you will see three sacred images. In the middle is Bhagwan Swaminarayan.

‘Bhagwan’ is a Sanskrit term of reverence for God.

This Mandir is dedicated to Bhagwan Swaminarayan, who manifested in north India in 1781, a period considered to be one of the most challenging in India’s political and social history.

Bhagwan Swaminarayan at the young age of 20 founded the Swaminarayan Faith under the wider umbrella of Hinduism.

During his 28-year ministry, he spearheaded a Hindu renaissance, ushering in many social and religious reforms, serving the poor and needy, and preaching against superstitions, addictions and violence.

He initiated 3,000 swamis, or ordained monks, built 6 majestic temples, wrote and inspired several works of religious literature, and was recognised and worshipped as God during his lifetime by countless individuals.

A more detailed overview of Bhagwan Swaminarayan’s life, work and teachings is covered in the ‘Understanding Hinduism’ exhibition on the ground floor of this building.

Bhagwan Swaminarayan resides in the central shrine here with his senior disciples Gunatitanand Swami to his right and Gopalanand Swami to his left. His raised palm gesture, known as the abhay mudra, symbolises divine grace and protection.

When ready, please press next while remaining where you are.