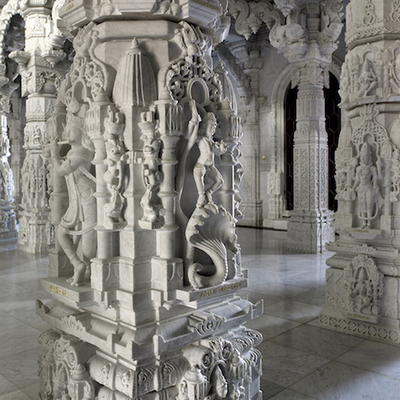 In Front of Carved Pillars

You can take a few moments to look at and learn about the exquisitely carved pillars around you.

Hindus believe in one supreme God who manifests on earth in various forms during different eras. The 12 pillars around the centre of the sanctum are dedicated to the various incarnations or avatars of God.

The pillar at the front right, for example, depicts various episodes from the life of Shri Rama, as told in the Ramayana.

Along the base of the pillar are gandharvas. These are celestial beings endowed with special talents in art, music and literature.

And around the top is a rare depiction of the dancing Ganesh following in the steps of his father Shiva, the Cosmic Dancer.

In Hindu artwork, the gods are often depicted with multiple hands to reflect their divine powers. Symbolic gestures typify the characteristics of various gods.

To give you an idea of the work involved in carving these detailed pillars, it took 4 craftsmen, each working full-time on each side of the pillar, around 60 days to complete one pillar. In total there are 193 pillars supporting the Mandir.

Take your time to see the other pillars and enjoy their delicate carvings, before we move on to learning about the central dome above.

When you are ready, please press next.